Getting Ready for the New Year!

I know I’ve been on an extended hiatus, but with the new year approaching and the holiday season starting to wind down–it’s time to get back on the blog wagon…..

Today is the the LAST day of 2014 and with my family in town for the holidays, we decided to try out our new fit bits and log some walking time….

I happen to live in quite a historic town so we combined some exercise as well as a lesson in history this afternoon too!

At a brisk 27 degrees but with some sun, we put on our layers, hats, gloves, scarves, fit bits and hit the road…..

First walking point of interest– The DeWint House
This is an old building circa 1700’s that was a home to General George Washington during his stay in the area…. 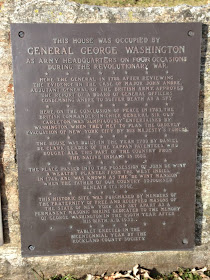 More walking with a stop to enjoy the local ducks paddling around in the town creek like it’s a hot summer day….

Originally built in 1668 and then expanded to include a tavern. It was safe ground for patriots to meet during the Revolutionary War era. It also served as a “prison” for the Revolution’s most notorious spy, Major John Andre. His fate was determined here..

The Manse: A beautiful Dutch style house from the early 1700’s

A brisk jog up a hill and we hit our next point of interest–Andre Hill
Everyone knows this hill is haunted. It’s the spot (as mentioned earlier) where Major Andre was hung!

More walking and now we take a walk through Hickory Hill…..
This is a beautiful street of houses originally built in the ’50’s by WW2 veterans. It’s a community of homes that were built with the purpose of preserving the natural environment. Every family who would have a home here contributed 1000 hours on a neighbor’s house as well since building funds were low.

The final stretch–The German Masonic building
And now we make our return and pass by an old abandoned building. This is the old German-Masonic building. The 20 acres of land was purchased by the German Masons in 1872 for $14,500 and construction started in 1906. From its finish date of 1909 it served as a residence for Masons and their family–anyone who could not fully take care of themselves.

Today it is abandoned and the roof is in disrepair in many spots, windows are broken and boarded up. It’s a sad fate for this beautiful building.

Tina Trevino, Partner & Director of Community Relations for Latin Biz Today is President & CEO of Tocaya Design under which she does design consulting for major apparel companies as well as designs, manufactures and markets her women’s lifestyle brand, Tocaya. With 25 years of industry experience most recently as Design Director of KBL Group Intl. Ltd., she has managed large creative design teams. Trevino provides insight on upcoming fashion trends for each season collaborating with designers, merchants and product development teams to help develop brand appropriate apparel. She specializes in sweaters, knits and wovens. Having previously worked with private label brands for stores like Kohl’s, NY & Co, White House|Black Market, and Ann Taylor to name a few as well as brands like Lee jeans, Wendy Williams, Brooke Shields Timeless, Torn by Ronny Kobo, and Whitney Port, she has the ability to build brands from the design and merchandising process all the way through fitting, production, and marketing.

Dr. Elizabeth Rios is a strategic visionary and has served her community in NY and FL in various Executive and entrepreneurial capacities for over 30…

Tina Trevino, Partner & Director of Community Relations for Latin Biz Today is President & CEO of Tocaya Design under which she does design…

See all of our mentors >

Kick Off the New Year – Life is Good!